Another great tip for cranking out the code, or in case you don’t remember the syntax of certain keywords.  Just start typing the shortcut for a code snippet and hit tab twice, it’s that easy.

For example, after you type “prop” you should see this:

Then you will see this after you press “Tab” twice:

Ever notice that little text box on the menu bar?  That is for searching

We all mistakes!  Quickly delete code by the line using this shortcut:

or the lazy-man’s shortcut would be to “cut” while having no selection on the desired line (However, that obviously overwrites your clipboard buffer):

Let’s say you’re creating a shiny new ASP.NET MVC site and you want to use Inversion Of Control of Dependency Injection.  You probably need an interface for the services/providers that you will be injecting into your controllers.  If you already have those service or provider classes, you can use the built in Visual Studio refactoring features to automatically extract an interface. 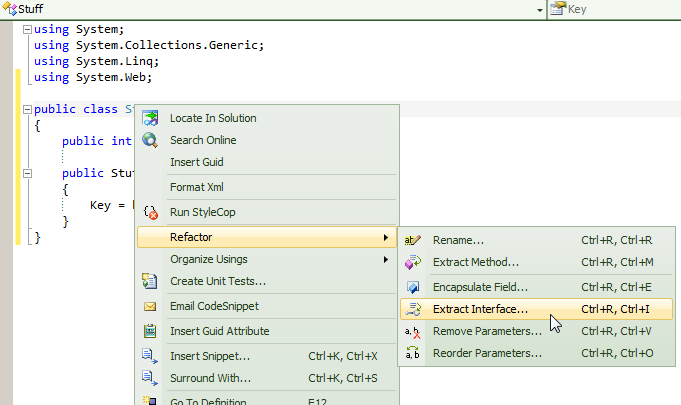 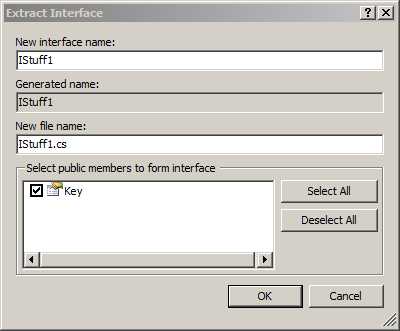 And here is the generated interface: 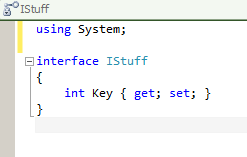 Pretty nice!  Just don’t forget to mark the interface as Public if you need to.  That often bites me because I have my interfaces in a separate class library from my implementations.

OK, so I couldn’t really think of a good tip off the top of my head, so I instead am copping out and telling you about the Extension Manager which is new in Visual Studio 2010.  You probably know about this unless:

The extension manager has all sorts of goodies.  There is everything from free extensions, to paid version, to ones provided by Microsoft to support out-of-band releases.  Take a look at what’s there, and let me know if you find something good!  Here is what I use:

I’ve used a bunch of others, but some of them didn’t stick, or I wasn’t actively using them so I removed them.  Keep in mind that any extensions you install could cause instability or performance issues.